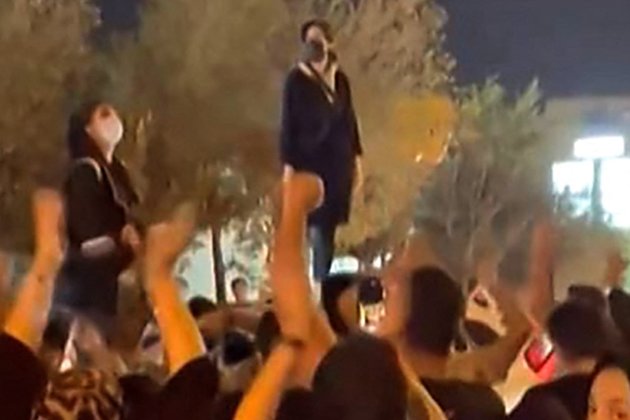 Iranian riot police in Tehran's main squares on Wednesday confronted people chanting 'death to the dictator' as nationwide protests continued over the death of a young woman held in captivity by morality police for failing to properly cover her hair with a hijab.

'We will fight, we will die, we will take Iran back,' protesters chanted in Tehran's Ekbatan neighborhood, a video posted on Twitter showed.

Protests also erupted in other cities over the death of Mahsa Amini, a 22-year-old Kurd who was arrested September 13 and died three days later in a hospital after falling into a coma. The demonstrations are the biggest in Iran since protests of gas price hikes in 2019. 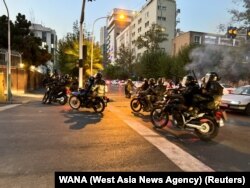 FILE - Police arrive to disperse demonstrators during a protest over the death of Mahsa Amini, a woman who died after being arrested by the Islamic republic's 'morality police,' in Tehran, Iran, Sept. 19, 2022.

Amini's family filed a complaint Wednesday against the police officers who arrested her, calling for a full investigation of how her apprehension was carried out, how she was treated, and how and why she was transported to the hospital.

'The morality police must be available, and we must have the right to have permanent access to their files,' Amini's family said. Judicial authorities have said the case 'will be handled with care.'

State media say that 41 people, including members of the police and a pro-government militia, have been killed during the protests, although Iranian human rights groups have reported a higher toll. 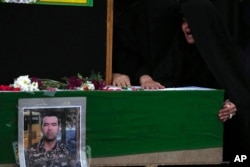 FILE - Wife of Hossein Taghipour cries over the flag-draped coffin of her husband, who was a member of Iranian paramilitary Basij force and was killed during recent anti-government protests over the death of Mahsa Amini, a 22-year-old woman who had been detained by the nation's morality police, in Tehran, Iran, Sept. 25, 2022.

The protests have spread to at least 80 cities and towns throughout Iran. Security police have used tear gas, clubs and, in some cases, live ammunition to quell the protests calling for the end of the Islamic establishment's more than four decades in power. 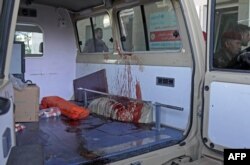 A blood-stained ambulance is pictured outside a hospital following strikes by Iran on the village of Altun Kupri, south of the capital Arbil, in Iraq's autonomous Kurdistan region, Sept. 28, 2022.

A senior member of Komala, an Iranian Kurdish opposition party, told Reuters several of their offices were struck and that there had been casualties and material damage.

Iranian authorities have blamed armed Iranian Kurdish dissidents for igniting the unrest in the country, particularly in the northwest where most of Iran's over 10 million Kurds live.

Some material in this report came from Reuters.