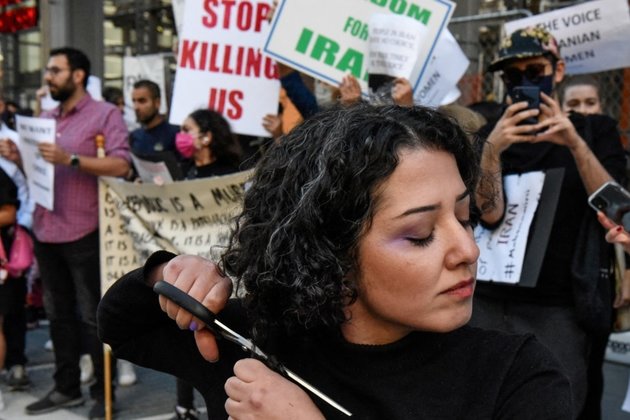 Iranians and their supporters around the globe are holding rallies on October 1 to show solidarity with protests inside Iran sparked by the death in custody of Mahsa Amini, who was detained by the morality police for allegedly wearing her headscarf too loosely.

Rallies were being held in 159 cities around the world, including Auckland, New York, Seoul, and Zurich, the Iranians for Justice and Human Rights nongovernmental organization said in a statement.

In Brisbane, Australia, thousands from the Iranian diaspora protested under the slogan 'Be our voice.' In Tokyo, demonstrators carried photographs of Iranian women burning their headscarves and cutting their hair.

Inside Iran, protests continued for the 15th straight day on September 30, despite a brutal crackdown by authorities that Iranians for Justice and Human Rights claims has taken more than 80 lives.

The Islamic Revolutionary Guards Corps (IRGC) said two of its colonels had been killed in the violence, claiming that 20 IRGC troops in all had been killed.

Riot police were massing in Tehran on October 1 amid reports that university students were planning protests to call for the release of students detained at earlier rallies.

Iran has blamed outside forces for the unrest. On September 28, Iranian drone and missile strikes killed 14 people in Iraq's autonomous Kurdish region after Tehran accused rebel groups there of fueling the protests.

Amini died on September 16. Activists and relatives say she was killed by blows to the head suffered while in police custody and rejected the authorities' claim that the 22-year-old had suffered a heart attack.

News of her death struck a nerve in a country already wracked by social unrest over poor living conditions and economic hardships exacerbated by crippling U.S. economic sanctions in response to Iran's nuclear program.

Protests have erupted in more than 80 cities to denounce state violence against women and demand greater rights, freedom, and justice for women. Many of the protesters have also called for an end to the Islamic republic.

With reporting by AFP